In 2015, Michael Lüders wrote a seminal book on the hypocrisy of Western[1] politics in the Middle East. Allegedly driven by Western ‘liberal values,’ interventions from outside powers have been anything but constructive, leaving the region in a much worse, much more chaotic situation than before. Taking Lüders’ major claim as a guiding narrative, it is difficult to not see how the current quagmire in the Middle East, the growth of failed states, violent conflicts, the refugee crisis and the surge of terrorism are largely Western, self-inflicted dilemmas. This does not imply that the illusive concept of the West as a superior state order is responsible for the long list of terrorist attacks over the last months. However, without any doubt, the bottom line is that Western countries, first and foremost the United States, bear a great responsibility in creating their own enemies and accelerating chaotic circumstances and radicalisation.

The good, the bad and the ugly

The first fallacy of several American governments and their European allies has been to distinguish between “the good and the evil” among conflict parties in the Middle East. Policymakers claim to understand the local culture and political situation and choose local leaders to be “evil” where deemed appropriate. It’s a process chain that has been largely repeated on various occasions, probably starting with the ousting of Mohammad Mossadegh in Iran 1953. Mossadegh had been a democratically elected chef d’état, and Iran was thriving as a showcase of liberties in the whole Middle Eastern region. Largely unknown to most of the public nowadays, the US and the UK were the main instigators behind the regime change in Tehran, putting into place a puppet government (led by the Shah), which catered to British and American economic interests in the country. Guaranteeing foreign domination of Iran’s oil sector for twenty years while neglecting the local population created a breeding ground for anti-US resentments among ordinary Iranians. Numerous are those who believe the Islamic Revolution of 1979 could have been prevented/would probably not have happened without the Western interference in Iran. As if history repeats itself, the same naming and shaming of evil leaders recurred on various occasions, from Saddam Hussein in Iraq, Qadaffi in Libya to Assad in Syria. Former US President George W. Bush coined a famous phrase when speaking of ‘the axis of evil’.

The West is always the best

Of course: contrary to the evil, Western forces feel the need to represent enlightened values and disregard their own severe mistakes (that have cost the lives of thousands of innocent people in the region). They feel empowered to impose sanction regimes (as in Iraq and Iran) – which – by the way – never led to the envisaged regime change and improved social/political climate. Instead, Iraq is a horrific case where a society of well-educated people, including some of the best doctors and scientists in the Middle East, was destroyed by an externally-sanctioned regime. Throughout the 1990s, the country was so badly hit that at times even first-aid mechanisms and vaccinations for childhood diseases were missing. Western ignorance also surfaces when it comes to the choice of “friends” in conflicts in the Middle East. While cooperation with Russia was always seen as an option of last resort, supporting dubious proxies on the ground was done without the blink of an eye. Blatantly, the American decision to dissolve all armed forces of Saddam Hussein and replace them with an Iraqi army of their own liking pushed thousands of former soldiers into the arms of more radical forces such as the Islamic state. Equally opaque, US weapon support to allegedly moderate Islamist forces ended up arming Jihadist groups in the Syrian civil war. The Islamic State would not have been able to acquire such weapons without indirect, unintended American assistance.

The axis of instability

Speaking of an axis of evil has been an American narrative, and the war against terror has been continued by Barack Obama with much smoother language, using drones and surrogate warfare without any ‘boots on the ground.’ Hypocritical positions by consecutive American administrations have magnified the situation. Take Egypt, a de facto military dictatorship, tolerated by all Western forces for reasons of stability and even financed with trillions of dollars (making it the largest rentier state on earth). Take the Gulf States, whose citizens often finance radical Islam in the region, but who are still best partners, mostly Saudi Arabia. Or the Israel-Palestine conflict, which the West has considered for a long time as so one-sided pro-Israel that the real underlying problem has not been understood.  Could it be worse? Well, the EU has admitted to its own ambivalence and narrow-mindedness by adopting a far more distanced, differentiated neighbourhood policy towards Middle Eastern countries.  Accepting one’s own mistakes, not forcing one’s own views on states in the region are some first steps to be taken … but from the American side there is no such thing to be expected in the near future. There’s a new President about to be elected, either a candidate that wants to abandon NATO and pull back all American troops. Or an expansive agenda by the less radical, yet still belligerent democratic candidate, which could lead to new tensions/errors in the Middle East. Finally, supporting the Arab uprisings has been the right and only choice by Western countries, but not following up afterwards has been a cardinal error, as the crumbling state structures in Libya and Iraq demonstrate. The reality is that the Middle East resembles an axis of instability stretching from Syria to Libya, and the US remains invested in all major conflicts – without a clear idea where this investment will lead to.

[1] The „West“ is here understood as a concept delineating mainly the United States and its allies in Europe – all countries which claim to support liberal democracy, rule of law etc. 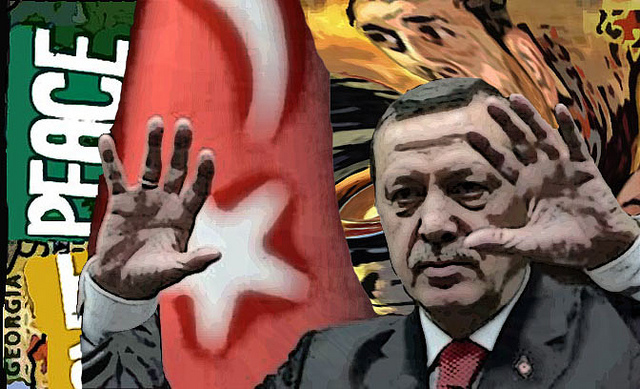 Fans of Game of Thrones or House of Cards are used to incredible turns and twists in the series’ plots. Violence, intricate power games and cold-blooded calculations are constant features of those shows and shed a negative light on politics. What is going on in Ankara might be increasingly seen as one of the latest episodes developed by writers for HBO or Netflix. Taken to the extremes, Turkish politics are also a game, with an aspiring Sultan trying to impose his rule over his realm. Let’s take a look at an anecdote from last week to clarify:

The leading article in Günes, one of the most government-friendly Turkish newspapers, blamed the recent bomb attack in Istanbul on Germany, which had allegedly not been able to ‘cope with the harsh Turkish reaction’ to the Bundestag’s recent resolution acknowledging the Armenian genocide. Subsequently, President Erdoğan announced an ‘action plan against Germany’, publically denouncing the members of German parliament of Turkish origin as co-conspirators with terrorist forces in Turkey. When most German newspapers criticised Turkey’s reaction and direct attack on the parliamentarians, the Turkish narrative went so far as to present this as a clear proof that press freedom in Germany was under threat.

Conspiracies like this are as recurrent as is the public bemoaning of officials of Erdoğan’s Justice and Development Party (AKP), who feel notoriously disadvantaged and discredited by alleged ‘enemies’ from both within and outside Turkey. We are not in the realm of fictional TV series, but paradoxically it appears that as the discourses by Turkish politicians become increasingly unpredictable and absurd, the AKP rules the country as unchallenged as never before. What is going on in Turkey, a country that was cherished as the rising regional force in the Middle East, a growing economic power and as some tend (or would like) to forget, which is still an official EU accession candidate?

Part of Turkey’s current predicament is self-inflicted. Take the Kurds. One year ago, the pro-Kurdish HDP landed a major election success by entering Turkish Parliament. For the first time since thirteen years, the AKP had failed to win an absolute majority in the legislative elections. Observers were hoping for a more peaceful Turkey that could leave the past violence behind it. Instead of a continuous armed conflict between the militant Kurdish wing (PKK) and the Turkish army, Turkey’s Kurds would get the chance to use Parliament as an arena to assert their political rights. What an illusionary thinking.

One year on, HDP-Parliamentarians have a hard time in Turkey. Erdoğan did have two choices when the Kurdish party won a considerable number of votes in summer 2015: accommodating them in a coalition government or re-launching the conflict and scheduling new elections. The AKP managed to regain its absolute majority in the newly held November 2015 elections, and is now stronger than ever before: recently, the immunities of Kurdish parliamentarians were lifted and Erdoğan replaced the too critical Prime Minister Davutoğlu, with a less critical figurehead (Yildirim). The establishment of a semi-presidential system with a strong presidential mandate for Erdoğan seems to be a palpable vision. The Sultan-like personal empowerment strategy however happened at the expense of the peace process with the PKK and the conflict resumed increasing levels of violence.

Turkey in 2016 is a different country than it was only a year ago. You can literally feel that something is in the air when strolling through the streets of Istanbul. On Istiklal Street, the major shopping avenue, a suicide bomber had blown himself up in March 2016, inflicting the death of five tourists and many more wounded. It was another heavy blow in a chain of deadly attacks throughout the country that had started in autumn 2015, and already the second one in Istanbul including foreign tourists in 2016. Although life in a metropolis like Istanbul must go on, people are anxious about Turkey’s fate – as the country now faces the threat of both the Islamic State and Kurdish extremists willing to use bomb attacks for their political goals.

Failing in Syria and beyond

Turkey’s foreign policy failure in Syria is the major factor behind the Turkish predicament. While Turkey does a great job hosting more than two million Syrian refugees, Turkey’s room for manoeuvre in the Syrian conflict is constrained by opposing any solution involving Al-Asad. Moreover, uneasiness with the growing autonomy of Syria’s Kurds has put Ankara at odds with the United States, who favour the Kurds as effective fighters against ISIS. Ankara’s preferred solution – regime-change, will most probably not manifest itself in the near future. Too many things are at stake in Syria, and the global repercussions of the proxy-war mean that any final solution is beyond Turkey’s capacity to act. Furthermore, as long as Ankara does continue targeting PKK positions instead of decisively fighting ISIS, rumours about ties between ISIS and the AKP will not cease. Some officials speak of Turkey’s ‘precious loneliness’ in the Middle East, as Turkey would arguably benefit from having stood with the people that rose against autocratic regimes in the region in the long run. Realistically speaking, this is a strategy to mask failure to the Turkish public, particularly in Syria.

Arguably, the aspiring Sultan has to be careful that the wind does not blow too harshly from all sides. Despite Erdoğan’s conviction to ‘fight terrorists until the end’, and despite the apparent stability of the governing AKP, the actual prospects of a stabilisation of the situation are very unclear. Turkey appears to be in a flummoxed state. Usually, cordial ties with allied countries should be a top priority for Ankara. Messing up the relations with major international players – Russia, the US and now Germany to name a few – is not in the long-term interest of the government. Because finally, while there is some truth in the idea that especially the EU needs Turkey to manage the refugee crisis, Turkey also depends on its allies in terms of trade and investment relations. At worst, disenfranchising allies and purporting absurd discourses might reveal that the apparently stable house of cards can be knocked down. If Erdoğan does not recalibrate his risky posturing, a very long winter might be coming for Turkey.