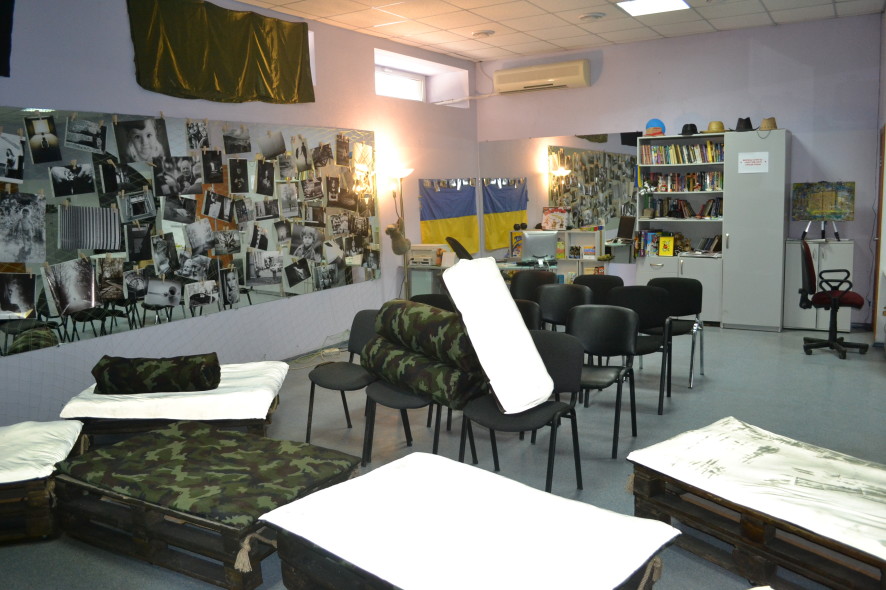 The next day, we woke up at 7 AM, only to find that the Right Sector fighters had already managed to take of personal hygiene, worked out, and finished breakfast. By the time we came downstairs, they were lounging around, chain-smoking and joking around. We got a bowl of dry buckwheat porridge and a pickle for our breakfast but, alas, no tea, as it was wasteful to make just a single cup, they said. When you cook for a battalion, I suppose you think exclusively in battalion-sized amounts and portions.

We rejoined the soldiers just in time for their muster. They began by collectively praying, and followed this by taking turns in announcing points on the day’s agenda. We were surprised that even a regular lowly soldier was awarded the space to step out and tell everyone- including the officers- their concerns or suggestions. The most important message of the day was that a trip needed to be organised to a pharmacy to organise some mandatory x-rays for a few soldiers to pass their medical requirements.I had not expected such a degree of care for the individual soldier from this grizzled unit.

We spent the morning hanging out, and serving as the butts of many of their jokes, recording many interviews but -again- not taking any photos. At noon, a squad was heading to the front to resupply their comrades, and they offered to give us a ride back to Mariupol. About fifteen of us squeezed into a small van intended for about eight, and with the sliding door open, we sped down the cratered dusty roads, dodging tank traps and overtaking anyone who may dare to challenge our pace. I was convinced that this was it; I would die, falling out of a Right Sector minivan and impaling myself on an anti-tank hedgehog, before I even made it to the front line. Needless to say, nobody bothered us at checkpoints this time.

We arrived in Mariupol and found out, to our despair, that our trip to the front line had been yet again postponed to the following day. Slightly depressed, we checked into the best hotel in the city, paying £8 pounds each, and proceeded to arrange meetings with a few local activists. We also explored the city, and found that Mariupol, a city of some five hundred thousand, has a fascinating history and cultural makeup. Like many towns around it, it has a sizeable Greek population, which was forcibly moved to the area from the Crimea in the late seventeenth century. There is a local Greek dialect, and overall, association with Greece is a big part of the local identity.

In 2014, Mariupol was also conquered by the Russian-backed separatists and remained under their control for about two months. Little changed under the rebels, we were told, and one journalist told me he didn’t even see a single rebel soldiers in that period. There were minor skirmishes in the centre of the city which, likewise, went pretty much unnoticed by the locals. The situation became more serious however when, in the summer of 2015, the city became an obvious high priority target for the rebels. If it were conquered, the Russians would be able to maintain a land bridge to the Crimea. As a result, the front line around Mariupol became heavily fortified.

Perhaps the most interesting encounter of our stay there was a meeting with a local LGBT rights activist. Her take on the situation was entirely different than the right-wing soldiers’ and other patriotic activists we had met so far. As a bisexual refugee from Donetsk, she told us that she ticks almost all possible minority categories, and said that her mission is to make sure that people like the Right Sector understand that while they fight for freedom, this freedom also entails tolerance for people like her. This is a crucial time, she said, when differences between those who are simply Ukrainian patriots fighting against Russia, and those who began the revolution by wanting to move the country in a civilised, Westwards direction, begin to emerge. She argued that to make the conservatives understand this, action is needed sooner, rather than later, and told us that one of her methods is attending the right-wing soldier’s parades and gatherings draped in a rainbow flag, an act for which she would surely be beaten, were she a man.

We were surprised by how interesting we found our debate with her and her friends, and realised how limited and military-heavy our approach had been so far. In focusing exclusively on the soldiers- whether regular or volunteers- and those activists that spend their time supporting them, we had ignored the reason why the Maidan revolution had occurred in the first place- the strive to move close to Europe and the West, and, at least partially, to their values of liberalism and respect for human rights.  We went to sleep in the early hours enriched by this experience and also excited, because we were resolved to dodge past any bureaucrat, like the Right Sector van, who might try and stop us from finally getting to the front lines.