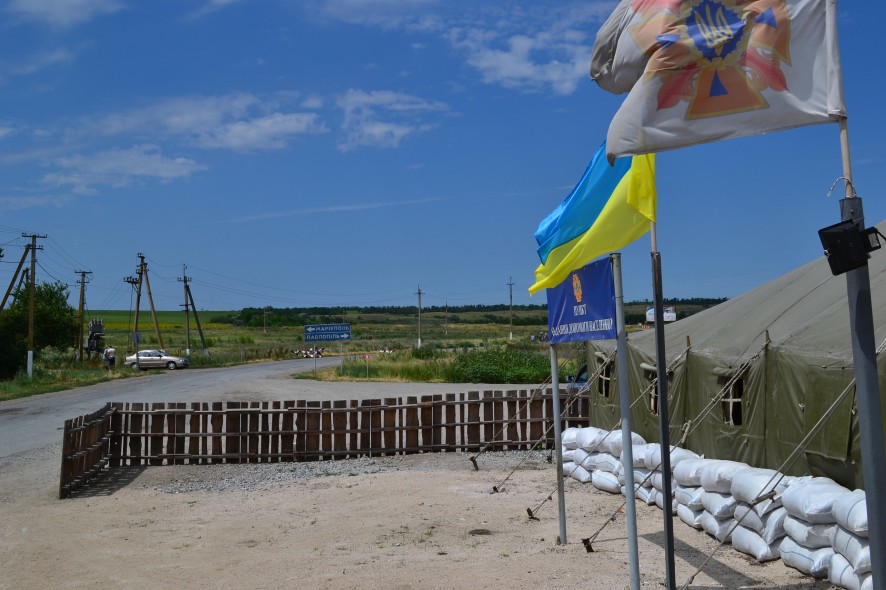 Finally, we set off for the front. Specifically, for the town of Pyshevyk, which now serves as the main border crossing between the rebel-held territories and Ukraine in the south of the front. It is used daily by hundreds of civilians, and so both sides have reached a sort of understanding of a ceasefire – to an extent. The checkpoint still comes under occasional artillery fire, and the Ukrainian forces have dug a number of bomb shelters in the area.

The Ukrainian side of the checkpoint is full of administrative huts and queues of cars.The local forces showed us the painstaking procedure that anyone entering Ukraine from the rebel-controlled territories has to undergo, including sniffer dogs and other various checks. It was obvious that they had done this many times for the media before.

We knocked on the door of a old house, and spoke with its eighty-five year old inhabitant. To me, this woman represented the incredibly tragic history of Ukraine and the Soviet Union. The woman was born in Chernobyl, Belarus, in 1931 and as ten year old, was old enough to experience the full might of the German invasion of the USSR in 1941. Aside from being in the way of the front line twice, first moving eastwards and then, when the Germans were retreating, westwards, she obviously also suffered under the Nazi occupation. She lived through Stalinism and the height of Soviet oppression. Then, in 1985, the Chernobyl nuclear disaster happened; again, she was close enough to see it first hand. The Soviet authorities moved her to eastern Ukraine, what was to become to front line some thirty years later. When we spoke to her, accompanied by a soldier, she looked at him and begged him to stop the war, go away, and leave her alone. She certainly knew better than anyone.

Our armed escort refused to come any further, but we went on, and crossed the line into the rebel territory. We were warned not to go too close to the trees on the horizon a few metres away, as then we would be in serious danger.

Keeping an eye on the ever-present minefield signs, we were surprised to reach a fully-functioning bus stop, with civilians waiting to be taken back to Donetsk. Hearing my guide’s Ukrainian accent, they were reluctant to speak with us at first, but soon enough our shy attempts to interview them turned into a fight, with civilians, mostly old women collecting their pension in Ukraine, screaming at one another. They complained they are forced to stand in the sun for hours without water or shelter, and said that the Ukrainians were doing this purposefully to punish them. When we told the soldiers on the Ukrainian side what we had heard, they shrugged their complaints off. These old women collect their pensions from the Russians in Donetsk, and then they come here for a second round, they said, and it was clear that felt little sympathy for them.

Before leaving, we sat around smoking and casually talking to the soldiers. We found that the Canadians were the only ones who have offered any help (‘I heard about a guy who was given a Canadian helmet’, said the soldier I was speaking to), and when I asked how certain they are that they are actually facing the Russians, the soldier paused, looked me in the eye, and literally burst out laughing. ‘They don’t even bother sewing off the Russian flag from their uniforms anymore’, he exclaimed.

Just as we were leaving, an OSCE car drove past. The soldiers muttered insults directed at these observers, and I found out that the reputation of the OSCE is to stay in a nice hotel well beyond the front line, drive a bit closer – but still safe – once month to make an appearance, and then disappear. More seriously, the soldiers said that more than half of the local OSCE observers are Russian, and they are certain that they provide information about the Ukrainians to the Russians. ‘When the rebels are close enough, we can see them get out of their fancy armoured cars and hug each other’, they said.

We shook hands, and got ready to leave. ‘You are going to Shyrokynne tomorrow?’, the soldier asked, and I nodded. ‘Well, you’ll enjoy that. This is a kindergarten compared to Shyrokynne’, he said. ‘I hope so’, I said, praying that our plans of finally getting close to the action, on our last day, wouldn’t fail. 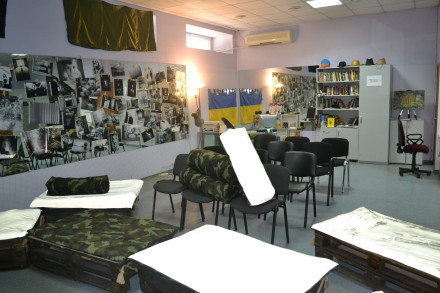 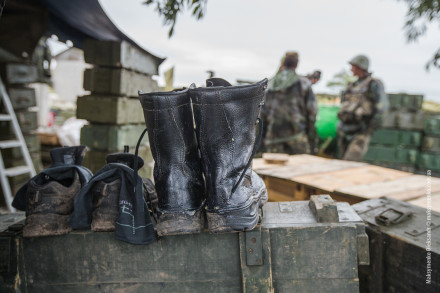 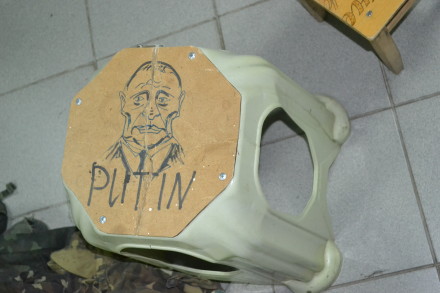