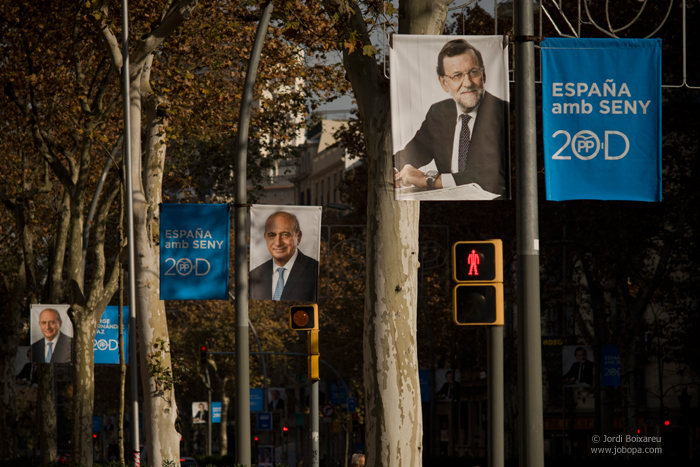 This is a question Spaniards have been hearing since the last general elections on December 20th, 2015. What happened to Spain? The rise of new political forces, the general discontent with the old political class, a society worn out by austerity and more than 300,000 emigrants are a few ingredients to the mix that made the results so uncertain.

Since the early eighties, not too long after Franco’s dictatorship had ended, Spain has primarily had a two-party system consisting of the conservative People’s Party (PP) and the Socialist Party (PSOE) alternating in governments.
This scenario quickly changed in 2014 with the rise of two political forces: Podemos on the left and Citizens in the centre. This broadening of the political spectrum has made the last elections the most competitive ones since the Spanish transition to democracy.

On the 20th of December, 2015, Spaniards decided not to give an absolute majority to any of the parties, forcing them to negotiate. This is an undusted, scary territory for everyone, including the politicians themselves.

Some explain this phenomenon as an angry vote on the people’s behalf. Spain has been severely hurt by the economic crisis and the harsh austerity measures that have led the government to cut on social services. A mixture of high unemployment, massive migration to other EU countries, the privatization of the public sector and internal corruption inside the central government is at the root of these results.

This explains why the vote so many people casted in December could have been a vote of protest, a vote that said “enough is enough” to the current social and political situation. However, voter turnout didn’t change that much in comparison to the last elections -only by four points- so the vote of “change” (whether it was for Citizens or Podemos) wasn’t big enough to rule out the classic parties PP and PSOE. Also, there are at least 400,000 nationals that have fled the crisis, all of whom have had a very difficult time to cast their vote, a bureaucratic negligence that has already been sanctioned by the UN.

The Spanish parliament doesn’t look pretty for either of the parties. The results spoke for themselves: PP (with 28% of the vote) has the most seats in parliament but not nearly enough to reach a majority of parliamentary votes in favor of another PP administration with Mariano Rajoy at its front. PSOE (22%) has had the worst results in its history and became the second political force. Podemos (20%) has been reprimanded by several critics that their refusal to form a coalition with the other national left-wing party (United Left) has restrained them from reaching a greater result. Lastly, Citizens (14%) were visibly disappointed by the result as they expected to occupy Podemos’ place.
But it does not end there, if that wasn’t enough, we must add all the votes that went to secessionist parties in Basque Country, Canarias and especially Catalonia, which is going through its own process of investing their president after months of negotiations.

Problems arise when the idea of forming a government seems nearly impossible. PP, as a conservative party, doesn’t have much options left, it could either negotiate a new government with Citizens and PSOE or form a grand coalition with PSOE, leaving out Podemos, Citizens and the secessionist parties.

PSOE, however, has repeatedly said no to any kind of agreements between them and PP, claiming to be a party that will bring change to the country which, to them, is incompatible with a conservative party on their side.
On the other hand, Podemos has been the first political force in Catalonia to whom they promised a referendum on independence. This is the reason why one of their main requirements to form a government is to respect Catalonia’s self-determination, something that PP, PSOE and Citizens overtly disagree on.

Pressure has been exerted from Brussels, the IBEX35 (Madrid’s stock Exchange) and even the Episcopal Conference to form a government that will bring stability to Spain.

The countdown, however, will start on January 13th in case parties haven’t agreed beforehand in forming a new government. After King Felipe VI will choose a candidate, negotiations between the King and the parties have to be held, if this candidate isn’t backed by the majority of the parliament. And if after said negotiations no agreement has been reached, Spain has to prepare itself for a second round of elections in which the party with most votes wins instead of the one with most deputies in congress.